Irish Eyes 2 is the sequel to the popular slot game Irish Eyes, by Next Gen Gaming. The slot has a light hearted feel, full of the luck of the Irish. Irish Eyes 2 has been designed to be played by slot players of all levels and budgets, and comes with a per spin stake so that you can really make it suit you. With up to twenty five paylines to choose from, and coin values of between 0,02 and 5 coins, this really is a great slot for pretty much everybody. This wagering system allows you play any of the 175 staking options ranging from a minimum bet of just 0.02 coins all the way up to 125 coins. Other than its great wagering system, Irish Eyes 2 doesn’t offer a whole lot in the way of extras. It has a free spins round and a wild symbol, but not much else.

The theme of Irish Eyes 2 is very much the same as that of its prequel, Irish Eyes. There are loads of typical Irish artefacts such as four leaf clovers and big Irish hats. The predominant colour is of course green, which makes the golden reels stand out nicely. The backdrop to the reels is a lush forest, presumably where leprechauns live with their pots of gold. The graphics are in a cartoon style, which may be fun at first but won’t be winning any art awards. They are however well designed and crisp looking and stand out nicely against the white background of the reels. This is definitely a modern slot, with good 3D graphics and a suitable soundtrack. It isn’t going to keep the very experienced slot players busy for long though, as it is more fun than anything else. 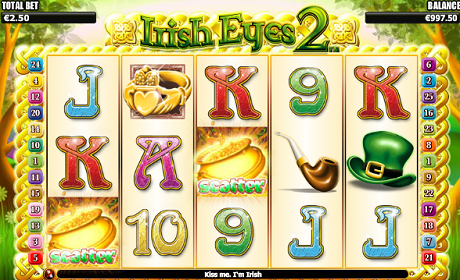 The symbols found in Irish Eyes are just as you expect them to be. They include a shamrock, a leprechauns’ pipe, a big green hat and a lucky gold ring. The base symbols are from the deck of cards, and are not going to send you into a world of excitement anytime soon. They are done nicely enough, with Nine through to Ace in a curly script and bright colours. The gold ring symbol is the best paying one on the reels, paying out at 1500 coins if you find five of them in a row on a winning payline with the mobile slots game. Obviously the more paylines you play in Irish Eyes 2, the more chance you have to not only find winning symbols but score free spins as well.

At internet casinos, there are only two special features in Irish Eyes 2, the wild symbol and the free spins. The wild symbol is represented by a flame haired, green eyed lady who substitutes for all other symbols on the reels except for the scatter. Finding even one her will award you with a prize though, albeit just one coin. She does get more valuable the more of her that you find, going all the way up to 5000 coins for five of her. The scatter symbol is the leprechaun’s famous pot of gold. This symbol offers payouts of between two and 100 times your total bet, depending on how many of them you find. Finding three or more pots will activate the free spins round, starting with ten free spins and going up to twenty. All wins during this feature are also subject to a 3x multiplier.

Mon Aug 24 , 2020
The Fire Queen slot by WMS Gaming is an online video slot based on a theme of sorcery and magic. The game revolves around its […]