One of the growth industries of the 21st Century, online casino play has seen new players flocking to online and mobile casino sites daily. Table games are generally based on traditional casino classics, although many new variations of these games are surfacing frequently.

Players can select whichever version they wish to play, and can do this on the basis of how much they are prepared to stake on the game. Pontoon Pro Low Limit is designed to be for players who may be novices, or learning the game, where the stakes are low and players can enjoy a large volume of pontoon play will very little risk of major loss.

In essence, pontoon is the British version of blackjack. There are some significant differences between blackjack and pontoon, and with the option of games such as Pontoon Pro Low Limit being available, it is in their interests to know the differences and nuances. Pontoon is similar to blackjack, yes, but with better odds.

Where blackjack and pontoon are the same is that both are based on a score of 21. They are both versions of the game provides players with some of the best odds available in the house. Adding the face value of the cards, the objective of the game is for a player to come as close to 21 without going over, while still having a higher total than the dealer. Standard card values apply in both games. Number cards are their equivalent in points and all picture cards are worth 10 points, with the Ace being either be worth 1 or 11 points. Suits are irrelevant. 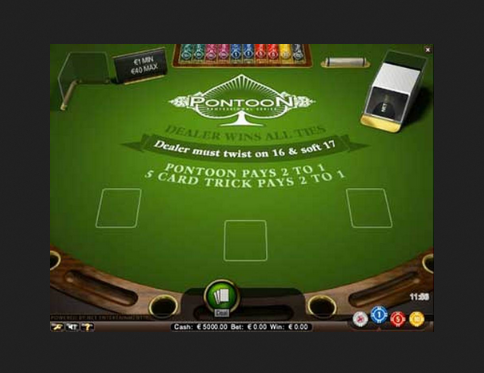 The differences between pontoon and blackjack, which obviously applies to the playing of Pontoon Pro Low Limit are that both the dealers’ cards are dealt face down. This makes pontoon somewhat harder to decide on strategy, with no clue whatsoever of the strength of the dealers’ hand. Another rule variance that is important to be aware of is that the dealer in pontoon wins all ties.

Pontoon Pro Low Limit may sport the feature of extremely low coin and betting ranges, but NetEnt has made sure there are some rather exciting aspects to this game. Getting dealt blackjack, a hand with an Ace and a ten or picture card, pays the player 3:2 odds. Getting dealt a pontoon on the other hand, pays players at a 2:1 rate. What is even more, where in blackjack using 5 cards to score 21 or less, is simply a 5-card hand. In the game of pontoon however, achieving this is termed scoring a 5-card trick, the second best possible hand, and can only be beaten by a hand of pontoon. The reward for a 5-card trick is the 2:1 odds. There are also some minor rules variations concerning doubling down, and some terminological differences. In pontoon, players wanting another card do not ‘hit,’ they ‘twist’, and a players wanting to remain with the cards they have do not ‘stand’, but rather ‘stick’. What a blackjack player calls ‘doubling down’, a pontoon player would call ‘buying’.

Pontoon Pro Low Limit is therefore a game for the aficionados, perfectly presented by NetEnt, and carrying some of the best chances of enjoying online at casino sites.