Playtech has produced an interesting and completely different type of three reel slot game with Triple Profits. You will be able to earn three times as many profits in this game than in many others. This slot game has three sets of single pay line reels.

Players can use a holding feature to fill reels with matching symbols after each spin, which adds an extra element to wagering on this game.

Triple Profits has Wilds and Scatters that can trigger bonus rounds, and these symbols can ensure that you win some really profitable payouts. The biggest win in Triple Profits is a huge jackpot prize of 500,000 credits, certainly a prize worth winning.

Triple Profits has, of course, a theme of making lots of money, one of everyone’s favourite aims. The symbols all have something to do with the world of finance, like Sales and bundles of Cash, different coloured Bags of Money, Calculators and Dollar signs, and Gold Bars. All of these symbols appear against a background of green, to emphasize the money making theme. The graphics are simply designed, but this is a three reel classic slot game that does not rely on gimmicks.

The aim of Triple Profits is to match up identical reel symbols across one of the three pay lines, which run horizontally across the three by three reel grid. When this happens, you will win a prize which is set out in the game’s pay table. The lowest prize multiplies the bets on the winning line by one, while the most lucrative of the symbols multiplies your initial stake by one thousand times.

Other wins are possible too. One Wild used in a winning combination will multiply your initial wager by two, two Wilds appearing will pay you a five times multiplier. Different combinations of symbols also bring in some prizes. Any of the three coloured Dollar Signs symbols appearing on a pay line gives you fifteen times your initial wager, and three of the Money Bags appearing will pay you five times your original bet. Any three of the other symbols, like the Calculators or Safe Boxes, will be paid out at twice the first line wager.

The game play of Triple profits is not like any other gameplay of three reel slot machine available on the net. Every time a player places a wager, only the lowest set of reels will spin, and they will reveal three randomly selected symbols. You will then have the option of holding these symbols for the next spin, which incorporates all three sets of reels, and will not take any stake from the betting balance.

If you decide to hold a symbol, that symbol will be held in that position across the grid, increasing the chances of matching symbols appearing on the next spin. If you find a winning combination on the first set of reel with the first spin, the other reels automatically reflect that combination, and Triple Profits will be awarded.

There is another simple bonus round that can be triggered if you find three Bundles of cash on the reels. This will take you to a new game screen, and you have to pick three out of nine Money Bags that will reveal instant cash prizes.

Triple Profits can be played online and on any of the major brands of mobile devices. Triple profits may be a simple game, but there are some great unique features in the game.

Let's Have a Look at Lottery Machines

Mon Dec 14 , 2020
With something as potentially lucrative as the lottery, and considering how many people buy lottery tickets on a regular basis, it stands to reason that […] 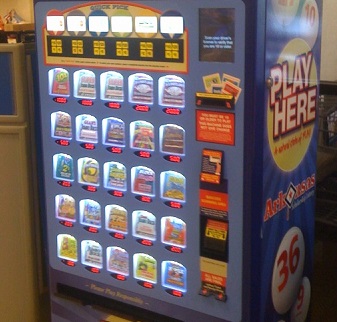