Strike Gold with Gold Strike slot machine, a 5 reel game with 20 paylines. The theme of the old West at the time of the Gold Rush is not new to seasoned slots players but with Gold Strike players have a game that is certainly one of the more interesting slots games. Gold Strike is designed and developed by Games Warehouse, with features that are all out of the ordinary.

There are but seven reel symbols, five of which are the 10, J, Q, K and A of cards. The other two are the Gold Strike logo and the pair of pistols.

The mining and gold digging theme in Gold Strike slots game is enhanced by the Wild symbol, a Sheriff’s badge, and a Bonus symbol that is several sticks of dynamite. Wins during the game are accompanied by gunshots in a rather notable soundtrack.

A feature of Gold Strike slots game is the Lock ‘N’ Load bonus. This happens during the base game, and when a winning combination is struck. The winning reel symbols stick in place and the other symbols spin in a free spin.

Should any more of that particular symbol appear during the free spin, it too becomes stuck and another spin is awarded, with the commensurate winnings. This continues unto no further matching symbols are landed.

Once the Bonus game has been triggered, players are taken to a second screen to a Tin Can Alley where they shoot some cans. Shooting a can and revealing the Lucky Strike nugget activates two more games, making this one of the most exciting and potentially lucrative online slots casino games.

In the first one, the Lucky Strike Bonus, players select one of 25 squares in the hope of finding cash.

In the second one, the Gold Mine explosions, player are asked to select one of three detonators to blow up entrance boards. A cash prize is the reward in this game too, should the guess prove fruitful and correct.

The Gamble feature on Strike Gold slots game has a variation attached to it that make it quite different from the regular red or black card selection. Clicking the gamble button after a certain win level activates this feature.

Players are able to select the wager risk level. The options are a ‘2-9’ wager, which pays out 1.5x the winnings, or they can attempt to turn over the Ace for 12x win. The game is played in a Wheel of Fortune manner, with the stated maximum limit of 300 000 coins.

This feature is statistically challenging, however, despite the unlikelihood of winning substantially with the feature, it is remotely possible to do so.

Wed Aug 12 , 2020
100 Ladies is a love story between two Ladybugs, and the setting for this light hearted cartoon like theme is a garden full of sunflowers […] 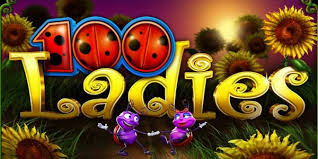