When it comes to betting on Boxing, your best chance of picking a winner is to be as prepared for the fight as the combatants themselves are!

Boxers Can Lose Their Mojo

You need to take a long, hard look at how much punishment fighters have taken in previous bouts.

Boxers can go from outstanding to unexceptional very quickly thanks to a thorough beating from an opponent or a particularly bad knockout, due either to psychological reasons or physical ones. Take special note of combatants with recurring injuries that insist they’re fine.

This works in reverse, too. An up-and-coming fighter that’s finally in the ring with a seasoned veteran may have bitten off more they can chew! No one is born with the ability to withstand a better opponent. It’s a skill that’s learned through long experience.

Fight Camps will sometimes release news about how things are going, updating fans on boxers’ progress and a surprising number of people overlook this. Rumours also circulate from combatants at the same gym, and although a measure of scepticism is always advised, it won’t pay to ignore these completely.

Camps are known to leak fake news, too, and may release information that’s simply trying to shift attention from a real issue. Follow everything you can find closely but take it all with a pinch of salt, and, when in doubt, trust your instincts.

A man is known by the company he keeps is a good idiom to apply to the Boxing world, since fighters will be as good or as bad as the partners they’re training with.

Your priority should be to find combatants who are being coached with the cream of the crop. They are going to vastly improve their sparring abilities during Fight Camp whilst gaining knowledge and insight from fighters at a higher level than they are.

Secondly, look for boxers whose training partners are a mirror for their upcoming opponents. It’s not great if someone is training alongside an orthodox fighter but is due for a bout with a southpaw!

All fighters were not created equal, and boxers don’t deliver in the same way across all styles. You need to have a thorough understanding of how your pick likes to handle themselves in the ring and how they will theoretically match up in terms of the style of their next opponent.

If you’re looking at a bout between a power puncher not necessarily known for their quickness, it’s not recommended that you wager on them against someone particularly speedy. If they’re a counter-puncher who can’t take what they’re giving, you might want to reconsider staking on them.

Take the time to understand each boxer’s style and what their opponent is known for before placing bets at sports betting sites. Better yet, try and find previous fights from each to see how they match up when qualities like the upcoming fight will present are a factor in the ring.

Thu Aug 20 , 2020
This is a unique slot theme choice from developers Openbet. It centres on Hollywood actor David Hasselhoff, and all his achievements in the industry. Simply […] 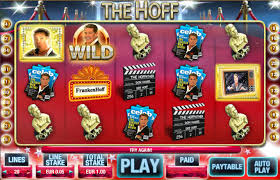